Basilicata is an ancient land, with traditions and superstitions that date far back into the dusty pages of history. Here, long before the arrival of Christianity, people were aware of the close connection of both men and animals to the land. The stories of terrible beasts and dragons were passed down from generations long ago.

People carry much of the animal world in themselves, and in the beliefs of these remote people, animals also know much of humans, and have abilities that they keep hidden.

In this shadowy land of imagination, creatures may live partly in each of these worlds, perhaps inhabiting the world of man in daylight, and the world of animals at night. They may manifest strange abilities, or simply shift their shape to become something else entirely. Men became bears, or boars, manifesting their deepest characters.

For the people of the hill towns and isolated villages of Basilicata and neighboring parts of Italy, those beliefs still have force. The legends and stories of the shape-shifters are held close, and are not normally shared with outsiders, with those who might mock them, or disbelieve. For the people that have inhabited these rugged and isolated places, though, the stories have power to affect their worlds, and their lives.

We drove north from Basilicata’s Jonica coast with a special mission in mind: today we would see if ghosts still haunted the crumbling ruins of isolated, half-forgotten Craco. In that exceptional place we found all that we hoped for.

We arrived on a sunny afternoon, winding through the dramatic and changing landscapes of Basilicata. The sun, broken only by scattered clouds, played upon the rolling golden wheat fields and rocky crags, the deep-green of the pine forests, and the walls of the high city of Pisticci.

Our well-maintained road climbed and dipped, and the beautiful views caused many a pause as they manifested the varied land-forms in turn. Then, as we rounded the top of a hill, we got our first, startling view of our destination.

Like a distant view of the castle in an old horror movie, the dusty grey town stood high upon a sharp pinnacle, and appeared as if part of the stone of the mountain itself. Not built by human hands, it seemed to have been thrust upward from the very bowels of the earth, exposed perhaps to attract its unwary prey, a lure of a city on a mountain.

We approached it slowly on the lonely road, passing not a single car, not a sign of a living creature but the starkly-black birds that soared overhead or croaked hoarsely from the dry shrubbery at the roadside.

The road itself, formerly smooth and well-marked, took on a look of neglect, with crumbling and broken concrete guardrails and patches upon patches. It climbed higher and closer to our destination, the town appearing and disappearing behind the sere ridges.

We stopped twice more to take in the changing views of the city. It was enough to give one pause, and fire the imagination. At each new vantage point the distant, empty windows appeared more and more like the vacant eye-sockets of so many skulls, weathered by time to an ashy grey. A sheer precipice on one side spoke of the extreme position it commanded.

It is an appropriate setting for connections to the otherworldly phantoms that many believe still haunt these hills. Even the name Craco has a haunted feel, rhyming as it does with Draco, the constellation of the dragon that spins in the night sky above.

There, among the abandoned ruins, the stories of the past might seem especially tangible. There one may still grasp the pith of the force, the power that remains potent despite the advent of science.

Craco was an ancient city, with documented human habitation dating back at least to the iron age, and in all likelihood, long before. Like many of the old tufa-stone cities, it is a place where early man might have been drawn, with caves in the soft stone and views over broad plains where wildlife and enemies could be seen from afar. Almost a kilometer above the sea, it is a commanding presence, visible from a great distance.

The town was well known to the ancient Greeks, who were aware of the fertile valley of farms that lay at the foot of the city. The agriculture of Craco’s Valagri, irrigated by the appropriately-named Agri river, fed many of the Greek colonies that flourished for 500 years on the southern shores of Italy.

The human population of Craco grew slowly over the millennia, and persisted through a series of ruling regimes. Like much of the region, it had been fought over by invaders many times. Christianity took hold slowly in this land of competing gods and spirits representing both the underworld and the sky. A thousand years ago it was referenced in a Papal bull addressed to the priest and people of Craco. By the 1950’s the town boasted thousands of residents, a cinema, several bars, restaurants, and at least two churches. The vibrant agriculture brought steady commerce to the town.

Yet today Craco stands abandoned, an eerie presence that many local residents take pains to avoid. Asked, they will advise you to go someplace more beautiful, leave that old town to its fate. Rumors abound that it is haunted, cursed, a doomed place built directly upon the gates of hell itself. It was those mysteries we wished to confront.

We drove on, at length passing a small marker at the edge of the town. There we were surprised to see signs that prohibited stopping or parking, and indicating the presence of an information center some distance ahead. We crept forward until we were passing the very foot of the town. To our right, a huge pile of rubble cascaded from high above, and the broken walls of houses spilled their rocky souls. To our left, a deep valley awaited them like a grave, already partly filled with the stony remains of the earlier landslides. The earth which had thrust this promontory upward now seemed determined to swallow it whole.

The modern promenade which once offered citizens a place to take an evening’s passegiata and enjoy the striking views now lay twisted and broken, broad slabs of concrete tipped at angles too steep for any but the small grey lizards that basked there. The city walls were also part of the rubble, along with the fragments of a modern concrete and steel wall which had once pretended to have some power to control the forces of the very earth below. A herd of goats wandered over the broken detritus, gnawing at the sparse grasses that survived there.

We paused briefly near a few trees, gazing up through the fence which had been erected by the commune to keep the unwary from sudden death in the ruins. The unearthly silence was broken only by the sound of the wind whispering over the broken stones. It was the very essence of desolation. 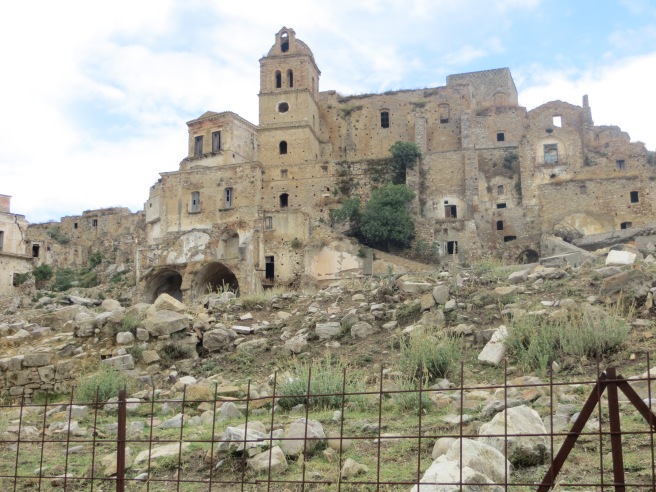 Although the steep slopes of the mountain had long offered a sense of security from enemies, it turned out that the thing citizens had most to fear was the mountain itself. It had awoken and wreaked a terrible vengeance upon the interloping city on its back.

At first no one noticed that the mountain was stirring. After thousands of years of life on the pinnacle, they assumed they were safe. Yet the time had finally come for the earth to reclaim its own.

The first few cracks in the walls of houses and public buildings were patched up and forgotten. Then in the early part of the 20th century there were some sudden collapses. They were problematic, but not serious enough to cause panic.

But the earth would not be ignored, and began to make itself heard. No doubt the groaning emitted from below must have alarmed the citizens of Craco, and the sticking doors and windows, the shifting of walls, might have worried some. Yet even in a land not unused to earthquakes, few could have realized the terrible wrath that would soon appear.

In 1963, almost without warning, a massive landslide carried away the western slopes of the town, including the road, the principal piazza with its war monument, the bar, cinema, and a number of houses.

The citizens of Craco gathered themselves, and still clinging to superstitious beliefs in the power of the land and the legends, began to repair their damaged houses. New walls with deep pilings were erected to ensure that the slope would be stabilized.

Despite their efforts, the land continued to creep, and more houses began to crumble. Large cracks appeared in buildings throughout the city. People began to realize that Craco, for all its history and ancient faith in the earth, was doomed to die. Some fled, claiming that the town was cursed. A few residents, perhaps tied to the mountain by thousands of years of tradition, too stubborn to relinquish their ancient roots and unafraid of the demons of the underworld, held out.

We parked beneath some wizened old olive trees just off the broken pavement of the main road. Fruit hung heavy upon their stout limbs, just as it had done for centuries. Would anyone now return to claim it?

After we had made a light picnic of bread, cheese, and fruit, I decided to hike downhill through the trees to see what could be found there. The path led me to scramble over broken stone walls, scattered red bricks, and fragments of shattered ceramics. A large black bird, perhaps a raven, hovered silently over my head in the still afternoon air, as if watching my progress.

At length I came to a sharp drop, apparently created by the slowly sliding mass I was walking upon. There, far below, I could make out the thin line of the two-lane highway that split the forests and farms, one from the other, a patchwork of rich green arbors and brown, ripening wheat.

The silence of the still afternoon was broken only by the loud droning of cicadas, emerged from their seventeen years of life underground to enjoy their scant few days in sunshine, to procreate, and then to return to dust. I found it an uncanny parallel, on a far different time-scale, to that of the mountain I stood upon. It too had emerged from darkness after millions of years, had lived its numbered days, and was now returning from whence it came.

This site uses Akismet to reduce spam. Learn how your comment data is processed.

Watch this space for details